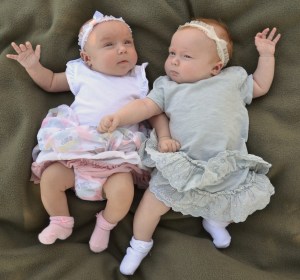 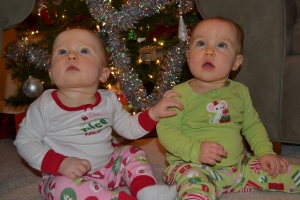 Today the twinsters are two.

Like every parent that has come before me and those that are surely following after me, I am in awe at my ability to keep the children alive. And, not only alive, but like, PROGRESSING. Whoa.

I mean, seriously, if you had seen what had happened to the cactus my in-laws gave me before they were my in-laws, you would’ve doubted my parenting skills.

I guess that’s my way of saying that I probably don’t deserve the credit for this amazing feat. You see, most days I rely heavily on the expanded Team K to get through the week. From the fabulous Miss Cathy to the remarkable Grandmas Sandy and Gigi, and a wide range of family and friends that love our girls to pieces.

And of course, none of this would be possible at all without Frank, a Dad extraordinaire who transitions from road warrior to cuddly papa bear in no time flat. Not only does he love playing with his girls and delights in everything they do, but he also pulls his weight when it comes to laundry, dishes, dinners and the like.

And here we are, two years after the birth of the twins.

Throughout the day, I found myself glancing at the clock and remembering back to what I was doing at that time two years ago.

Waiting for Frank to arrive.

Realizing we were minutes away from meeting our babies.

Hearing their cries for the first time.

Holding them in the delivery room.

Listening to the lullaby playing over the intercom as they wheeled me to the twins’ isolettes in the NICU.

Snuggling Ellie and Carrie for the first times.

Marveling at their tiny perfection.

I understood when parents talked about time flying, but I didn’t understand. Now, looking at our girls, I am amazed at how surreal it all is. The moments on the day of their birth seem to be as real and immediate as they were when I first experienced them. And yet…

Miss Elliana is a little love. Fiesty and emotional, she can be compassionate and demanding all at once. She wants snuggles and independence simultaneously. She knows all of her colors, makes a valiant effort at counting and her ABCs. She puts together sentences and has definitive ideas about how she would like her day to go. The challenges of being two wash across her face in waves throughout the day – wanting and craving independence, but still needing snuggles and lots of boundaries. She has a sweet sense of humor, giggling at little jokes that she makes up with her sister. She loves to sit at her little desk and color. She loves books, especially Goodnight Gorilla, The Going to Bed Book, On the Night You Were Born and Gossie & Gertie.

Miss Carrigan is a dynamo. Like her sister, she struggles with the two year old dilemma of wanting to communicate but being limited in her ability to do so. Carrie is most likely to sit with you and snuggle or read or pet your face. But, she is a bundle of energy waiting to be released. Fearless at the park or in social situations, she seems to have controlled any fear she has about new things and dives in head first. She loves her dolls and her binkies and her shows on TV. Carrie has a soft, kind heart, even when she’s battling the intense urge to be an alpha baby. When Ellie cries, Carrie asks, “What’s wrong with Ellie, Mama?” She loves to be tossed in the air, loves to do summersaults, and dances like everyone is watching.

They don’t always play together, but they always seem to be aware of one another. In the mornings, if one wakes before the other, they are usually eager to see each other. Carrie usually wakes up first and cuddles with me in the morning. When she hears Ellie stirring in the next room, her little head will pop up, “Sister? Sister?!” and Ellie will respond in kind.

When Ellie is misbehaving, all I have to do is say, sternly, “Elliana!” and she will stop abruptly. Ellie loves verbal affection and doting and takes any firm redirection very personally. Conversely, Carrie will blatantly ignore us. Her favorite act of civil disobedience is putting her foot up on the table at dinner. She has earned more than a few trips to time out, but always seems to understand the error of her ways and seems to be genuinely reformed… for the time being.

All in all, even with the challenges of turning two, I wouldn’t have it any other way.

It’s hard to admit that the girls are no longer babies. Heavens, they haven’t been babies for over a year. But when it seems like yesterday I was holding them in the NICU, it is a particularly jarring sensation to see little girls in the place of my tiny babies.

Happy birthday to my little ladies, Elliana and Carrigan. You are loved.

One thought on “twins turning two”