Yes, I have fallen behind in the girls’ second year with marking their milestones.

It’s not that they girls have stopped developing and thereby no longer necessitate updates.

And yes, I know there are toilet locks.

And yes, I know there is probably something for the fridge, too.

But you know what?  I have the door locks for the bathrooms and haven’t had time to install them for a variety of VERY good reasons, reasons that may include my new fascination with Married to Jonas or WORK or OTHER AMAZING THINGS THAT I CANNOT NAME RIGHT NOW.

So, the twinsters are doing great.  Walking, running and TALKING up a storm.  They say things like,

etc, etc.  For anyone looking to compare how many words my girls have compared to their progeny: STOP (collaborate and listen, Ice is back with a brand new edition…). This is not an exhaustive list.  I’m sure your children are brilliant and say many amazing things.  My kids are starting to count. We could do this, “I’m parenting better than you” business all day long and you know what we’ll have to show for it? Even more exhaustion than we currently have to show for it. Let’s not be like that, K?  K.

Anywho.  The girls are stacking blocks, reading books, completing shape/animal puzzle-type games, dancing and generally living la vita loca.  Carrie feeds herself very well with a spoon and wears her dinner bowl as a very fashionable hat.  Ellie is an A+ snuggler who has completely grasped an innate ability to whine her way up into my arms. It’s not at all charming, but it is 99% effective.

Frank has started a pseudo evil game of telling the girls to put their arms up and then promptly tickling them.  The result? Our genius babies no longer raise their arms over their heads.  This is awesome unless you’re their poor mother who has to change their clothes and give them baths.

We are at that awkward phase of the girls wanting/loving independence, but us not letting them have it because, well, they can’t handle it.

Tonight, for example, there was a LOT of the word no.

“NO! Do not pull that out of the garbage!” (said while I am pulling twin #2 out of the dishwasher)

“NO! Do NOT play in the toilet! I am serious! OUT OF THERE!” (said while I am pulling twin #1 out of the garbage)

They are such happy babies and they don’t seem to be taking any of this “no” business personally.  Well, I mean, I haven’t gotten a bill for therapy yet, but they seem mostly happy and fulfilled.

The highlight of the last few months has been that the girls are starting to hug and love back.  They always enjoyed a snuggle or two, but now when I pick up the girls, they wrap their arms around my neck and squeeze.

Also, the girls have discovered make up, love wearing dresses, ask me to put their hair up in pony tails (only to take them out immediately) and are enamored with shoes of all shapes and sizes and styles. 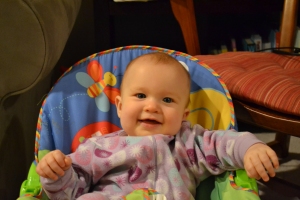 4 thoughts on “a long overdue update on the twinsters”