Another month has gone by!

And finally, the girls are sleeping through the night.  Sure, “through the night” appears to be a fairly approximate term and really means “5+ hours consecutively” but I cannot complain.  The girls are eating between 6 to 8 ounces and are starting to enjoy their oatmeal with pro-biotics (hey, when you have girls with BM issues, you take whatever advantage you can get!).

But more than just sleeping and pooping, the girls are starting to get more defined personalities.

Ellie is our more reserved, seemingly introverted baby.  She loves the mornings and always greets me with a large gummy smile.  Her red hair appears to be permanent – even her little eyelashes are still red.  While she seems to have a fiery Irish exterior, she has a more stoic Scandinavian interior. Something that I’ve noticed recently is that if I am watching TV while I feed her, she is craning her neck to get a good look at the action.  She really seems to like watching reality TV, probably because they show so many faces.  And also because she has good taste in TV like her mama.  Needless to say, I will be turning off the TV more frequently while feeding them – no need to get them hooked early!  In other Ellie news, she rolled over for real over the weekend.  Sometimes babies roll over “accidentally” when they have acid reflux because their bodies are so tense.  Now she is rolling over because she really wants to, which is awesome!

Carrie is smaller than Ellie and very bald.  While they both have sparkling blue eyes, that is about where the similarities end.  Carrie is a ham.  While Ellie makes you work to get a smile out of her, Carrie thinks everything is absolutely hilarious.  Both girls started to belly laugh over the past month, especially when their daddy makes them do funny dances, but Carrie really lets loose.  While Ellie loves the morning, Carrie seems to be able to party well into the night.  She loves looking around and engaging in her surroundings.  She has yet to roll over, but she definitely wants to.

What has been really cute to see is how the girls are starting to interact.  They are starting to look at one another, grab at each other’s hands and play a little bit together.  As you can probably tell, it is hard to describe one baby without inadvertently describing what the other is not.  I suppose that is a hazard of having twins, but also a joy.  I hope that as they grow up, even though they are likely to be so different, to enjoy each other as much as we enjoy each of them. 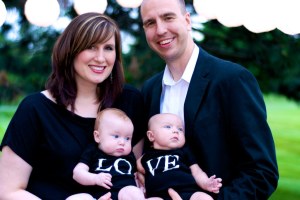