My dear friend Meghan called at about twenty minutes to five today.  Oh, the joys of receiving a phone call from an adult!  And, as luck would have it, I just finished changing and feeding the girls, so there was a happy calm over the entire house.  Ahh…. the calm before the storm.

At 4:50 p.m., Frank announced that dinner was ready and I told Meghan, “I’ll call you right back, we’re just going to have dinner.”  Yes, that’s right – it wasn’t even 5 p.m. yet and we were ready for dinner. To say that our biological clocks are a bit off would be an accurate assessment of the situation.

Carrigan was in the bouncy chair and I put Elliana in the swing.  About three seconds into eating, Elliana started squawking.  Frank picked her up to comfort her and discovered that she was all wet.

This was curious because she wasn’t wet when I put her down and she didn’t have any signs that she had spit up. Frank decided to check her diaper upstairs in the nursery.  Mistake number one.

While I was still seated at the kitchen table, I heard Frank discovering the horrors in our daughter’s diaper.

“Do you need help?” I called up the stairs.

“Are you sure you don’t need help?”

I thought I would feel differently about our first blow-out diaper.  You know how you imagine the romance of being proposed to, the joy of your wedding, the bliss of giving birth to your children, etc?  I thought that there would be mass hysteria on the streets below, a soundtrack of terror in the background and some sort of angry monster banging on our front door.  Instead, I could hear birds chirping outside the window, the sound of children laughing as they played soccer on the field behind our house and the roar of our neighbor’s engine as he peeled out of his driveway.  But in front of me was a nightmare of poop covering my child, her changing table, my husband and an escalating number of diapers.  Every time Frank attempted to put a new diaper on it, the stream of baby nastiness spewed forth.

And just then, as he was taking off her third diaper, Ellie stopped crying.  I cocked my head to the side.  Time slowed down.  When Ellie stops crying during a diaper change it usually means one thing…

And indeed, there was pee.

Frank and I looked at Ellie and she looked at us.  And she started crying again.

Now, this is where I should’ve cut our losses and done what we knew worked.  I should’ve just given Ellie a sponge bath upstairs and thrown everything in the hamper.

But no, that is not what I did.

My mother-in-law suggested that we give the kids baths downstairs on the washing machine.  Initially I balked at the idea – I’d heard that washing the kids on a counter was dangerous because the tub could slip off the surface.  But after thinking about it, I figured that I could put towels over the washer and dryer and get a nice little bath system set up.

So, I lugged a bath tub, towels, soap, new clothes, a new diaper and a screaming, half-naked Ellie down to our finished basement.  I put Ellie in the pack’n’play and started getting the bath ready.

But her bath tub didn’t fit under the faucet of our slop sink very well.  I thought about using our floor-washing buckets to fill up the tub, but I felt that sent the wrong message to Ellie.  I went upstairs and grabbed our extra-large red tupperware salad bowl.

Frank, who was attempting to finish his dinner, saw me with the red salad bowl.

“What are you doing with that?” he asked mid-bite.

“I’m using it to give Ellie a bath,” I repeated.

“Why?  Don’t you have her tub downstairs?”

“So what are you doing with the salad bowl?”

“In the salad bowl?”

“NO!  I can’t fit her tub under the faucet so I’m using the bowl to fill up the tub.”

I went downstairs with the red salad bowl, filled up the bath tub, undressed Ellie and put her in the tub.

Ellie looked at me and I looked at her and then I heard the ominous sound of farting in a bath tub.

I looked down and saw that Miss Ellie had pooped in her bath water.

She cocked her head to the side as though to say, “Well, now what?”

“FRANK!  She pooped in the bath tub.”

Now, it’s worth saying that Frank does not like giving the girls tub baths.  He feels like he can give them a more thorough sponge bath than a tub bath.

He came downstairs and saw Ellie cold and screaming in her bath towel and me looking at the bath tub and announced he was going to give Ellie a spa sponge bath.

I cleaned up the bath tub (lots of antibacterial spray) and started the laundry.

When I made it upstairs, I found Frank and Ellie in the nursery.  Frank had turned on zen spa music and was carefully cleaning Ellie.

And Ellie was not crying. 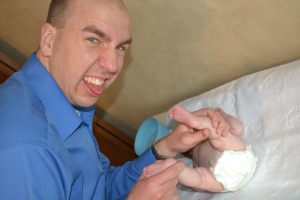 Meanwhile, sweet Carrie was sitting quietly in her bouncy seat, staring out the window and plotting.  I’m sure she will not let herself be outdone by her sister. 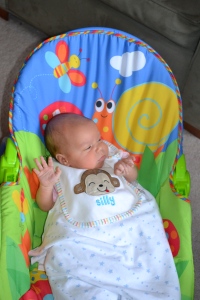 Carrie staring out the window and plotting ways to out-do her sister.

Even the stuffed animals in the nursery were appalled by the diaper disaster!

And that is why I didn’t call Meghan back.  Or answer Sue’s phone call.

9 thoughts on “why I didn’t call Meghan back…”