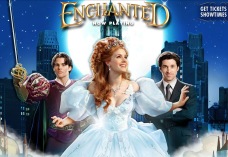 Last night I watched Enchanted, one of my favorite movies to watch.  It’s one of those movies that when it’s on, I can’t help myself.  The movie reminds me a lot of Frank.  No, it’s not because Frank channels Patrick Dempsy with his dashing good looks and pragmatic approach to life.  Nor is it because Frank often introduces me the way Prince Edward introduces Giselle – “Giselle is my love, my heart’s one true desire!”

Enchanted reminds me of a truly K-Fam Thanksgiving experience.  Back in November 2007 Frank was a jet Captain on the Dornier at the now defunct Skyway Airlines.  As per usual, Frank was at the bottom of the seniority list, meaning that he was working holidays.  I decided that I would accompany him over Thanksgiving on his trips so that we could spend Thanksgiving together.  On Wednesday night before Thanksgiving, we went to Cleveland. Skyway actually put the pilots up in a somewhat decent hotel which was close to a very nice mall.

One of Frank’s favorite things to do is walk around a mall. This is surprising because he does NOT like to shop.  He enjoys stopping at stores that have nice smells or kitschy items with limited uses (ie. Brookstone, Spencers).  We walked around the mall for a while and then decided to go see the movie Enchanted. We thoroughly enjoyed the movie.  I remember walking out of the theater holding Frank’s hand, feeling light and free.  We had dinner at the Macaroni Grill and drew fun pictures on the paper table cloth and enjoyed being together.

The next day, Thanksgiving, we flew back to Milwaukee and then up to Appleton.  We stayed at the Raddison Paper Valley in downtown Appleton.  We arrived at the hotel at 2:30 in the afternoon and saw, to our amazement, a huge Thanksgiving buffet set out!  Victory!  We approached the hostess stand, all of our bags in tow, and asked the hostess for details on the buffet.  She told us they were taking it down.  Oh, the looks on our faces!  We pleaded with her – can we just go through once and get some Thanksgiving food – we are far from home and won’t get a real Thanksgiving!  Nope.  She wouldn’t budge.  As we walked by the buffet on the way to our room, we watched them throwing out entire cakes and pies.  Oh, how we wanted to weep right there!

Slightly disheartened, but determined to have a lovely Thanksgiving anyway, we went to the hotel bar, hoping that they may have some Thanksgiving fare.  No such luck.  I think Frank had a hamburger and I had a chicken sandwich.  Regardless of the lack of Thanksgiving themed food, we had a wonderful time watching football in the bar and talking with his First Officer.

Later that night, we decided that we wanted dessert, but room service didn’t have anything good, so we found a vending machine and shared a Three Muskateers bar and a Rice Krispy Treat.  Oh, it was bliss!  Almost like having French Silk Pie… but not quite…

It is one of my happiest memories of us.  We had such a nice time celebrating Thanksgiving together and I am so glad we did it!  Considering that Frank is back at the bottom of the seniority list again, perhaps we will try the adventure again this year, but maybe in a more exotic location, like LA or Puerto Rico!

There was an error retrieving images from Instagram. An attempt will be remade in a few minutes.